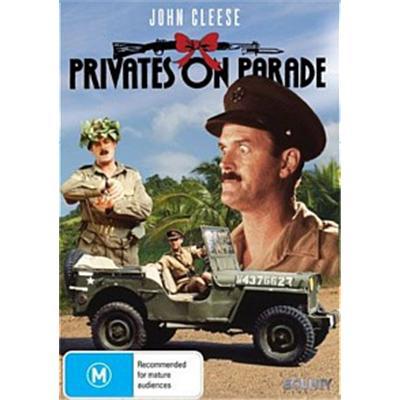 Legendary British comedian John Cleese leads a hilarious ensemble case in this bawdy military satire. The year is 1948, and the eccentric bible-bashing Major Giles Flack (Cleese) has been ordered to organize a song-and-dance unit to entertain the battle-weary British troops fighting the Communist insurgency in Malaysia. His Acting Captain is Terri Dennis (Denis Quilley), an ageing theatrical drag queen, who has the job of getting their motly crew of performers up to scratch with the musical drag routines.

But while he's transforming the front line into a chorus line, his entertainers are being used as a cover operation to sell illegal arms to Malayan guerillas! Will Major Flack's musical band of brothers be able to raise military morale while dodging bullets and shrapnel, or will their show become the ultimate bomb? Based on the satirical stage revue by Peter Nichols, the oddball mix of Carry On farce, military buffoonery, and backstage shenanigans is not to be missed.