Next Generation $50 Banknote in Folder 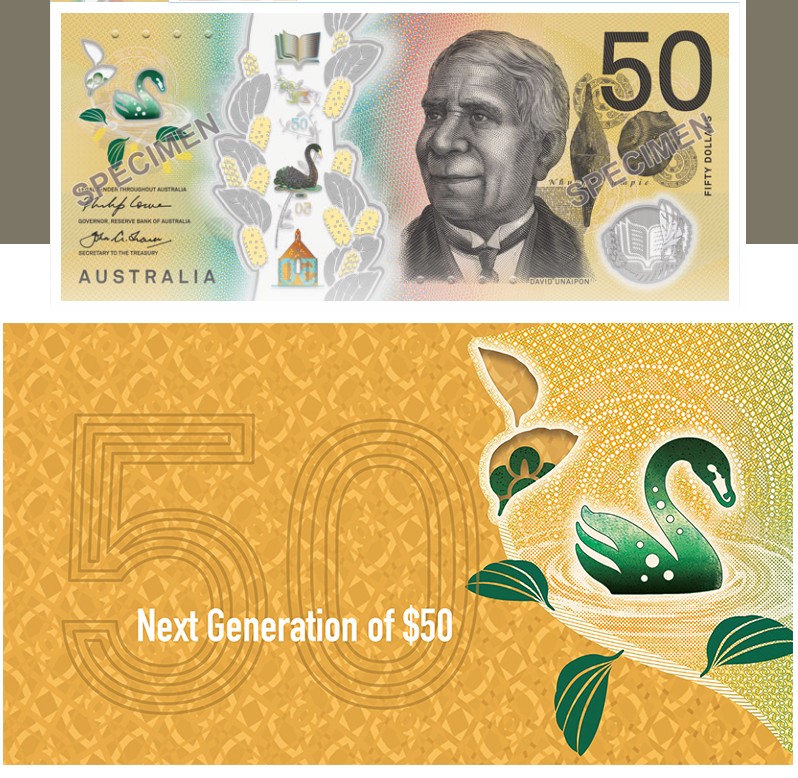 Next Generation $50 Banknote in Reserve Bank of Australia Presentation Folder

The commemorative Next Generation of $50 folder contains one uncirculated $50 banknote from the new polymer series released in October 2018, housed in a clear window. The folder depicts artwork used on the banknote.

The note design features a distinctive top-to-bottom window, reversing ‘50’ and rolling colour effect.  Each denomination in the new series of banknotes features a different species of Australian wattle and a native bird within a number of the security features. The $50 banknote features the Acacia humifusa and the Black Swan (Cygnus atratus).The new $50 banknote retains the portraits of David Unaipon and Edith Cowan, which are drawn from the same source photographs represented on the first polymer $50 banknote.  The banknote celebrates David Unaipon, an inventor and Australia's first published Aboriginal author, and Edith Cowan, the first female member of an Australian parliament. Their work is recognised in several design elements on the banknote, including shields from Unaipon's Ngarrindjeri nation and images portraying the practices of miwi and navel cord exchange about which Unaipon wrote. The banknote also includes pictures of the gumnut brooch Cowan had made to symbolise that entry into Parliament was a ‘tough nut to crack’ for women, and the King Edward Memorial Hospital, a women’s and maternity hospital that she helped establish.