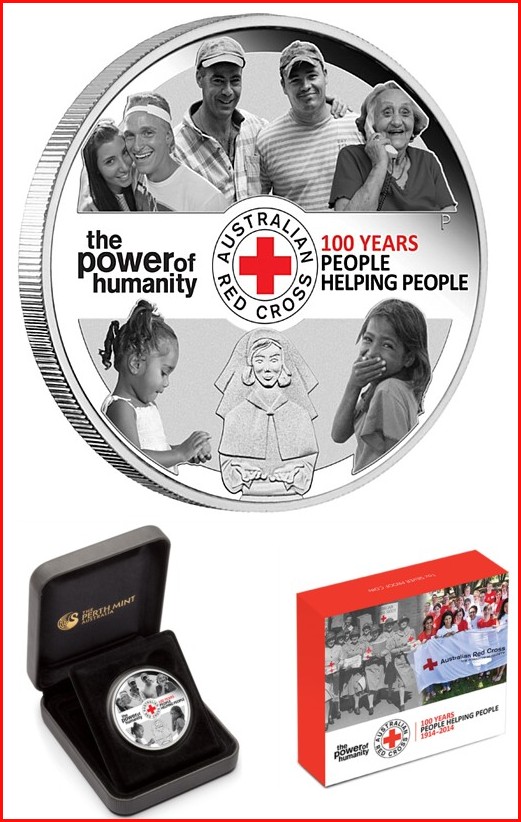 For the past 100 years, Australian Red Cross has been a vital part of Australian life. Founded on an enduring spirit of volunteerism and generosity, Australian Red Cross is an impartial, neutral and independent organisation. It strives to offer assistance without discrimination, and to alleviate human suffering wherever it may be found, regardless of nationality, race, religious beliefs, class or political opinions.

Each coin is meticulously struck from 1oz of 99.9% pure silver in proof quality.

The reverse of the coin features a series of black and white photographs representative of the broad cross-section of society that Australian Red Cross assists. The design also includes an image of a World War I nurse. The inscriptions 100 YEARS PEOPLE HELPING PEOPLE and THE POWER OF HUMANITY, Australian Red Cross centenary logo, and The Perth Mint’s ‘P’ mintmark also appear in the design.

Issued as Australian legal tender under the Australian Currency Act 1965, the coin’s obverse features the Ian Rank-Broadley effigy of Her Majesty Queen Elizabeth II, the 2014 year-date, the coin’s weight and fineness, and the monetary denomination.

The Perth Mint will release no more than 5,000 of the 100th Anniversary of Australian Red Cross 2014 1oz Silver Proof Coin.

The coin is housed in a classic presentation case within a centenary-themed shipper featuring both a historic and modern Red Cross image with the Australian Red Cross centenary logo. Each coin is accompanied by a numbered Certificate of Authenticity. This one has a nice number - 200.