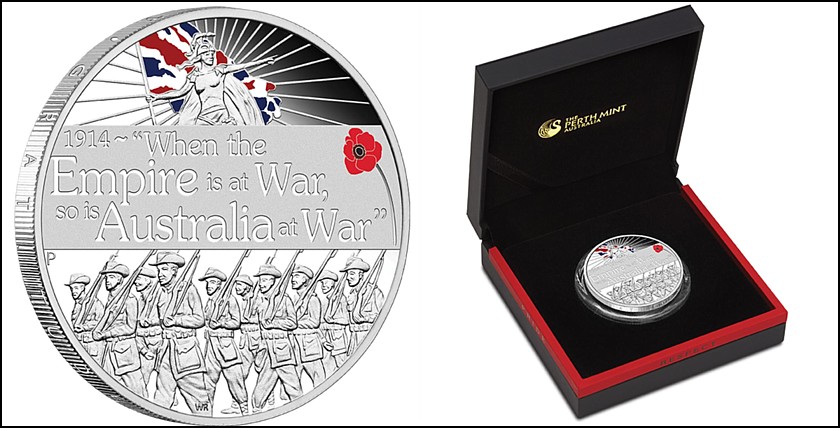 The British declaration of war on 4 August 1914 was greeted with widespread enthusiasm and jubilation across the Empire. In Australia, it was a chance for the fledgling nation to prove itself in battle and to rally to the cause, with the then Prime Minister, Joseph Cook, declaring “…When the Empire is at war, so is Australia at war.” The first campaign Australian troops were involved in was in German New Guinea, when the Australian Naval and Military Expeditionary Force was dispatched to seize Germany’s Pacific colonies, in September 1914.

This preceded the dispatch of the First Australian Imperial Force (AIF) to Egypt in November 1914. After four and a half months spent in training camps near Cairo, the Australian and New Zealand Army Corps (ANZAC), together with troops from Britain and France, departed by ship for the Gallipoli peninsula.

Each coin is struck from 1oz of 99.9% pure silver in proof quality.

The coin’s reverse features a group of soldiers marching beneath a representation of Britannia holding her trident, and wearing a Corinthian helmet, symbolic of British liberties and democracy. The inscription, ‘1914 – When the Empire is at War, so is Australia at War’, a red poppy motif and The Perth Mint’s traditional ‘P’ mintmark are also incorporated into the design.

Issued as Australian legal tender, the coin's obverse depicts the Ian Rank-Broadley effigy of Her Majesty Queen Elizabeth II, the 2014 year-date, and the monetary denomination.

The Perth Mint will release no more than 7,500 of The ANZAC Spirit – Declaration of War 2014 1oz Silver Proof Coin.

Each coin is presented in a black and red display case with the words ‘Pride’, ‘Respect’, and ‘Gratitude’ inscribed on the outside of the case, within a themed shipper, accompanied by a numbered Certificate of Authenticity.