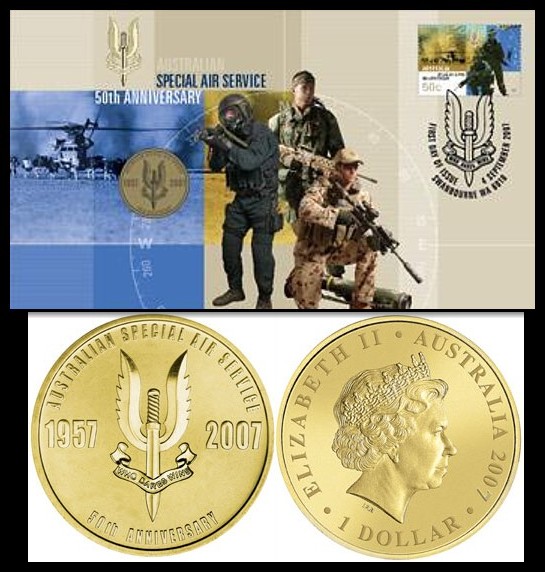 2007 PNC - SAS $1.
The Australian Special Air Service, the crack regiment revered as the 'eyes and ears' of the Australian Defence Force, celebrates its 50th anniversary in 2007.  Fully supported by the Australian SAS itself, this spectacular Perth Mint release offers collectors of Australian military commemoratives a magnificent tribute with which to celebrate the Regiment’s many vital contributions throughout the world.

Issued by Australia Post, this Stamp and Coin Cover celebrating the 50th anniversary of the SAS is designed for the many admirers of those who live by the famous motto “Who Dares Wins”.  The Stamp and Coin Cover incorporates an Australian legal tender coin struck by The Perth Mint from aluminium bronze (30mm) in uncirculated quality.   The coin’s reverse features the year-dates 1957 and 2007 separated by the SAS Regiment’s winged dagger badge.  The design is surrounded by the inscription AUSTRALIAN SPECIAL AIR SERVICE 50th ANNIVERSARY.  The coin is housed in an envelope depicting exciting action images courtesy of the SAS Association.

The envelope also features a coloured 50c Australia Post stamp depicting more SAS soldiers.   The stamp is cancelled with a commemorative postmark in the shape of the winged dagger badge.  Dated 4 September 2007, the postmark includes the words “Swanbourne WA 6010” in reference to the home of the SAS during the past 50 years.