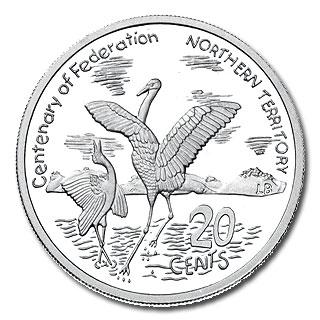 The coin design features two Brolgas against the background of the Territory's mountains.  Famed for their elaborate courtship dance, Brolgas are one of Australia’s most iconic birds. A number of traditional Aboriginal legends and dances are associated with the bird, and use movements that mimick their graceful performances.  The name Brolga is taken from the Aboriginal language Gamilaraay, in which they are called,burralga.

Image provided is showing coin design.  Coin is in very good condition, ex circulation.  It is not unusual for coins to have marks.  If any questions, we are happy to provide a scan of the coin before purchase.

Back to: Twenty Cent Coins