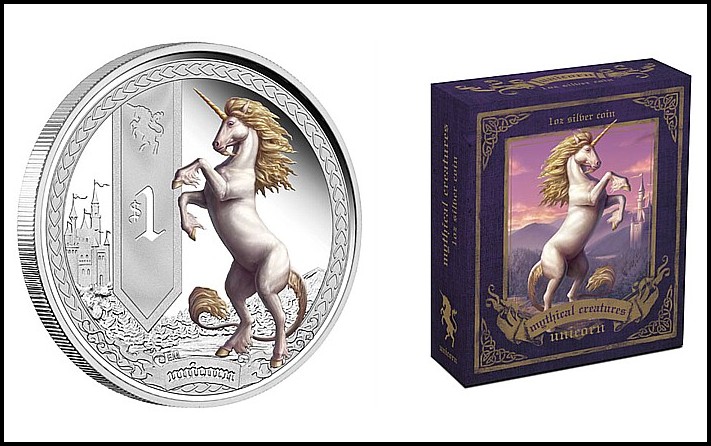 The unicorn is a mythical creature of European folklore that resembles a white horse with distinguishing goat-like features. The legendary animal bears a small beard, feathered hooves and a long, slender, spiraling horn which grows from its forehead. It is believed that the horn of a unicorn possesses both magical and medicinal properties. As a symbol of purity, grace, wisdom and power, the enchanted beast was well represented in art and heraldry throughout the Middle Ages and the Renaissance.

The coin’s reverse portrays a coloured unicorn, against the backdrop of a forest scene and castle. A medieval style banner displays a silhouette of a unicorn and the monetary denomination, with the inscription ‘unicorn’ featured on a scroll at the base of the design.
The coin’s obverse depicts the Ian Rank-Broadley effigy of Her MajestyQueen Elizabeth II and the 2013 year-date.