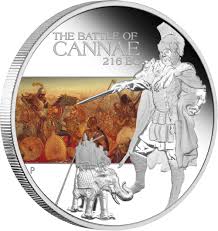 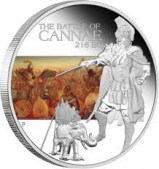 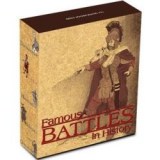 The Second Punic War, which lasted between 218 and 201 BC, saw the Carthaginians under Hannibal inflict a series of crushing defeats on the Roman legions culminating at Cannae.  Here, the Carthaginians faced a massive Roman army comprising 80,000 infantry and 6,000 cavalry under the command of consuls Paullus and Varro.  Flanked on either side by horsemen, the huge Roman infantry was unusually deep and tightly formed.  Hannibal’s armoured cavalry charged into the Roman horsemen on the left, cutting them down before riding round the back of the enemy line.  Meanwhile, the centre of the Carthaginian infantry pulled back, enveloping the legionaries until they were surrounded on all sides with no means of escape.  Hailed as one of greatest tactical achievements in military history, the battle resulted in Rome’s greatest defeat with the loss of up to 50,000 men.  Despite its devastating loss, however, Rome prevailed decisively at the Battle of Zama in 202 BC.

The coin’s reverse portrays a coloured depiction of the famous encounter.  Struck elements of the design depict a Carthaginian warrior and one of Hannibal’s 30 war elephants, which famously crossed the Alps with his army.  The Perth Mint’s ‘P’ mintmark is also incorporated into the design.

Issued as legal tender under the authority of the Government of Tuvalu, the coin bears the Raphael Maklouf effigy of Her Majesty Queen Elizabeth II on its obverse.