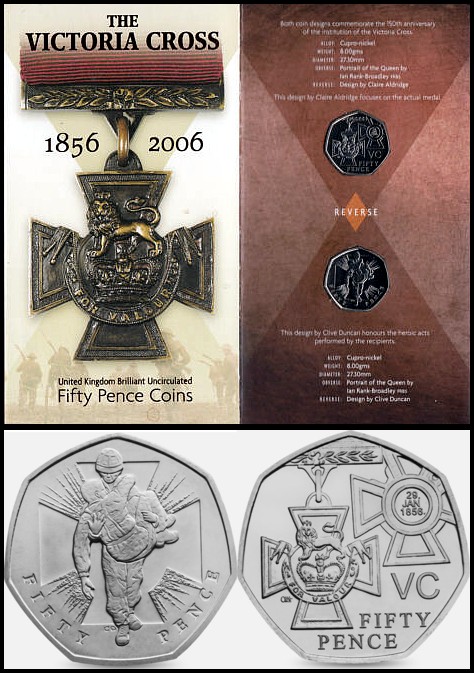 Two commemorative fifty pence coins both marking the 150th anniversary of the institution of the Victoria Cross. The reverse of one coin depicts the actual award itself with the date '29 Jan 1856' on the top right hand side, the letters 'VC' on the lower right hand side, the value 'FIFTY PENCE' at the bottom and the designers initials 'CA' on the left hand side. The second coin shows a soldier carrying a wounded comrade with an outline of the Victoria Cross surrounded by a sunburst effect in thebackground. The value 'FIFTY PENCE' and the designers initials'CD' are engraved at the bottom. The obverse of both coins shows the crowned head of Queen Elizabeth II with ''ELIZABETH II D G REG FD 2006' and the designers initials 'IRB' Both coins are housed in a cardboard full-colour presentation folder describing the history of the Victoria Cross.